You may have noticed Penny MacRae’s article in Yahoo News recently about Rajesh Shah and his new store front business with the controversial name in India.

Yeah in case you haven’t heard he named his store HITLER and then claimed that he never ever heard of WW2′s Adolf Hitler before.

Do you buy his story?

Rajesh’s excuse for naming his store after the warmongering maniac was that the term is commonly used to describe people who are very strict.

Can that really be possible?  I have never been to India so I don’t know how things are there.  I do know here in America it has been “proven” that by the end of almost every argument a NAZI reference is made.

You may have noticed Daniel Trotta’s Huffpo article from last week about the Army having an issue filtering NAZIs out of the military in 2012.  In February there was a report of an elite US Sniper team in Afghanistan proudly posing for photos with American and NAZI SS flags. Did you know there was even a US Navy barracks built in the shape of a giant NAZI swastika?  Do you think the government has a better excuse than Rajesh for this foolishness?

What is behind all of this? 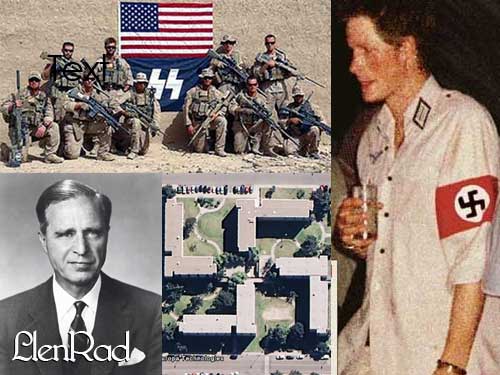 We don’t have to sit by and let these Pro-Hitler memes pick up momentum though.  There is plenty we can do, together.

Here are three ways we can stop HITLER, again:

I once worked with a guy who had all kinds of crazy tattoos about NAZI this and that.  When I talked to him he once told me flat out how he felt about black people and how we are less than human and yada yada yada.  All I did was keep talking to this guy like a regular person, crack jokes whatever.  I didn’t pick a fight with him over his beliefs as that would have been too easy.  I just kept the discussion civil.  As time passed I was able to get him to see how much he actually DID LOVE ALL KINDS OF PEOPLE and not just “PURE BLOOD ARYANS”.   It seemed food was the best way to make this point.  People hate until they try the food.  I don’t know where he is today but I bet he regrets getting those tatoos. He’s Probably dating a black women.

If you watch enough Hitler episodes on History channel then you will realize that the one technique Hitler used to get everyone on his genocide agenda was fear.  He stoked the worst ideas that people could have imagined about their own neighbors.  Tricking people into committing insane acts only because they themselves were affraid.

3. Let the ‘know it all Zealot-Fanatics’ fight each other.

If the first two steps don’t work a sure fire way to stop Hitler, again is to let the politicians fight not the armies.  The next Hitler wanna be undoubtedly will be a politician.  Since they are always the ones with all the answers and harsh rhetoric let’s arrange it so they can fight their boogymans and save everyone else the trouble.  It can be streamed online and simulcast on PPV.  Let the proceeds benefit charity and everyone wins.  Right?

I look forward to reading your comments thanks for weighing in on this controversial topic and not being scared.

Tagged with: Hitler
Posted in Blog