The trendies are really out in full force these days.  To watch them fully come out in the open is really surprising and actually amusing.

Bill Nye “the science guy” is trending in the news today because of his recent comments AGAINST people who believe god created man and the universe.

Have you heard about this?  Is this yet another scientist too smart for his own good?

I wonder if the master elite trendies aka the scientists are switching back to evolution as a topic because people just laugh at them over global warming?  This science czar crowd is really proud of themselves aren’t they?

They believe their own hype so hard they can’t image  someone disagrees with them.  Even Flava-Flav knows better than that.  What causes them to treat their silly THEORIES like EVOLUTION and GLOBAL WARMING like proven facts?

If something is true wouldn’t it be self evident?  Like the fact cats don’t like water.  Why is it that these “scientists” ignore their own objective processes when it comes to selling their propaganda to the public?  How can you fit a political agenda into a scientific equation or hypothesis?  Is this science? 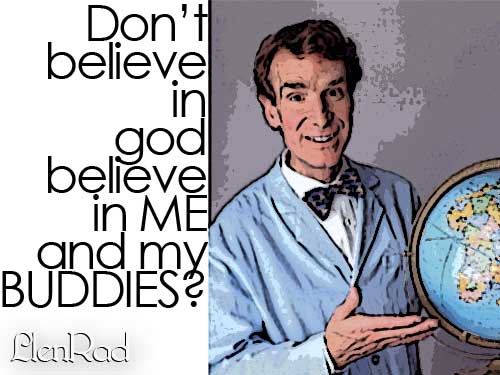 Why do these so called professionals get so aggravated because people simply don’t believe them?  Is it because their theory’s make absolutely NO common sense.  The idea that you can get a human beings out of a monkey is seriously beyond ridiculous to me and most people.  It’s really not even worth a serious debate, seriously.

One thing I agree with Bill Nye on is when he said that belief in GOD slows down scientific progress.  Well, I”m all for slowing down this brand of progress.  This scientific agenda doesn’t seem to care too much about people anyway.  Maybe that’s why they want people to believe we all came from apes?

The truth is these “scientists” actually believe that there are too many people on earth but we should Trust in them on what we should do about it.  Never mind what grandma and grandpa taught you that has been passed down through the generations.  Throw all that out it’s time to get trendie.   Everybody knows trendies don’t believe in GOD they believe in scientists.

My questions is what do scientists believe in?