Empire Shootout in the Gun Control Capital of America

Another week another violent murder in the news.  This time in New York City the home of the most strict and ridged GUN LAWS in the country.  The home of the illegal 32 ounce Slupie-Man NYC Mayor Michael Bloomberg.

There is a debate raging in this country on Gun Rights vs Gun Control and this type of incident should put this argument to bed.

Will people finally understand that making things ILLEGAL don’t prevent them from happening?  All they do is cost taxpayers more money.

The King of the Nanny State aka Mayor Bloomberg has commented that in this latest shooting many of the people injured were actually shot by police officers responding in cross fire and not the suspected bad guy himself.  UPDATED CNN now says ALL of the injuries was caused by police shooting at the suspect missing and hitting people.

WOW.  That should teach you huffpo gun control advocates something.  Not only will the police not protect you from getting shot they could show up actually shoot YOU.  Now do you FEEL safe?

However, when you look at the comments on AOL’s Huffington Post you see the same mindset thriving strong.  Commentors saying stuff like, “something needs to be done.”  Its like Batman, Spider man, somebody, Tarzaan?  save us! 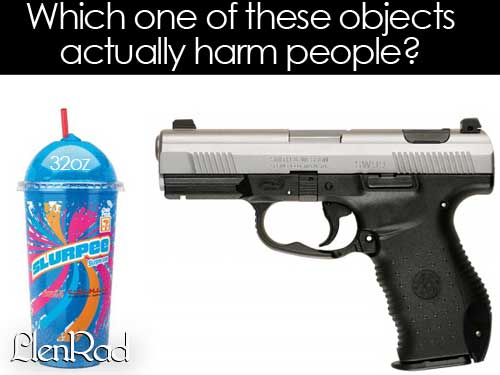 These folks are just too trendie to understand.  We are all alive and living and each second from the next is unique and not pre-determined.  There is no something anyone can do to guarantee you safety from one moment to the next, except YOU. Even the police will tell you to your face they cannot prevent something from happening to you.  Call your local police office and ask them, can you protect me and my family from getting shot?  See what they say, tweet it to @FreedomMMC.

The idea that Police will keep you safe is really a dangerous idea.  The reality is the guns are ALWAYS available if they are EVER available.   At the time of this posting It hasn’t been made clear where the suspect got his gun from.  The truth is the NYPD already has a horrible record and just got caught earlier this year stealing and selling guns, so what is the point people use your freaking head for once.

This means if someone wanted to shoot you earlier this year in New York they could have literally bought the gun to do it from a NYPD officer.

It really doesn’t matter though.  If this guy had it in his mind he was going to KILL HIS BOSS.  He would have figured out a way to do it.  It’s like the saying goes 6 million ways to die, choose one.