Mitt Romney a Poser, a Bush, or a Reagan?

The majority of this campaign season has been focused on WHAT Mitt Romney is about.  Is he about jobs is he about War?

WHAT will he do about this issue or that issue?  WHAT about the debt crisis? WHAT about IRAN?

The biggest question I haven’t noticed anyone asking is WHO is Mitt Romney? Seriously.

What is a POSER?

Skateboarders use the term to identify someone who acts like they are a real skater but really are just trying to look “cool”.  You know like the rapper Lil Wayne, who takes this guy seriously on a skateboard?

Is this what Mitt Romney is doing when he constantly keeps implying he is the new Ronald Reagan?  Is he just a wannabe poser?

Who is silly enough to buy this comparison?  Sure, Romney fits the “desired” politician “look” that Ronald Reagan had and he was a governor like Reagan was.

Is that all it takes to start walking around saying you’re Reagan 2.0?

Doesn’t it take being your own man?

Isn’t this what made Reagan unique?  Just like George W. Bush these presidents created their own infamous legacy.They both successfully FOOLED Americans into believing they were conservatives while all the time leading the country into a ditch of DEBT, COCAINE, and WAR. 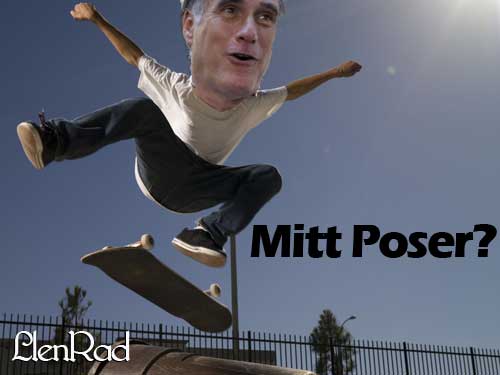 Has Mitt Romney ever been his own man?  If you didn’t know his father was also a politician so if anything isn’t Mitt  just continuing the family business?  This is kinda like George W Bush isn’t it?  We all know his family history.

Mitt also recently said that he’d probably send in troops to invade Syria if elected who does this sound like to you?  This is like a what would George W do moment isn’t it?

Seriously, Who is Mitt Mitt Romney.  Is he the next Ronald Reagan or George W Bush part 2?

If Romney was a poser wouldn’t he have a reputation of flip flopping or saying anything to get elected?  What is his reputation?  Who is this guy?