What defines America more than this word?

What it stands for.

Where it got popular.

Today nicksupasaur pulled off a legendary FAIL and embarrassed himself at the same time proving my point better than I ever could.

The throw a rock and hide your hand technique no bro too late.

This is the only conclusion that I could reach after going through a process of reaction to this confused foolish young man who for whatever reason took time out of his life to make sure that #ReplaceMovieTitlesWithNigguh was a trending topic on twitter.

He could have been successful at any number of things that would have been positive and beneficial but noooooooooo.  He Just has to make fun of black people.  Not Asian people like he is mind you, or white people, or Latino people, or any type of person just the blacks.  It’s always the blacks, why?

The options to react to this are:

WTF is a Raisin?  A Racist Asian. 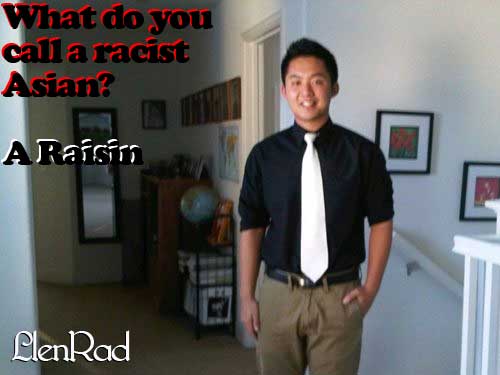 This is the newest trend that’s growing like Gangnam style in the trendy world.  Ignorant Asians who think its fun to be racist and make fun of  black people.

Notice that they don’t think it’s funny to use insulting Asian slurs for jokes.  It’s not like Asians don’t have plenty of terms to choose from and it’s not like the jokes wouldn’t be just as funny.

This is about disrespect.

I know people want to conclude like small minded children that since black people say it to each other then everyone can say it to us?  Well, this proves how much smarter black people are than everyone thinks.  Obviously we understand basic reasoning. 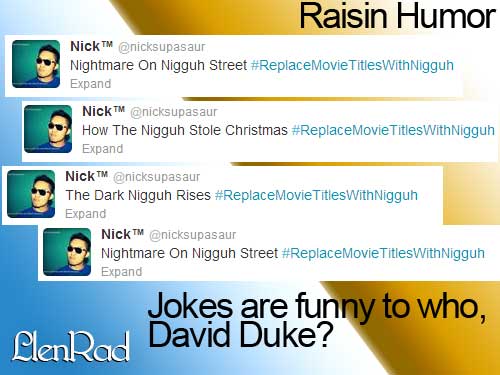 We were smart enough to flip a negative into a positive.  For hundreds of years we were called NIGGER.  In about 20 years we took a term of punishment and made it a term of endearment for our own exclusive use.

What raisins and other bigots like the KKK fail to realize is we use our terms on EACH OTHER not other people for a reason.  It’s like black Cosa Nostra or our thing, no soprano.  Good, bad, indifferent, it is what it is; but, it’s FUBU.  For us by us.

Imagine how ignorant it would sound for males to make jokes about females using the word BITCH.  It does’t work like that and men are smart enough to know better.  Women can call each other bitch every other word if they want to,  if it’s girl talk or something that’s appropriate in girl-girl discussions.

Notice, there are no men fighting to convince females that’s it’s ok for dudes to call them bitches.

Notice, there are RAISINS trying to convince us it’s cool for them to call us niggers. 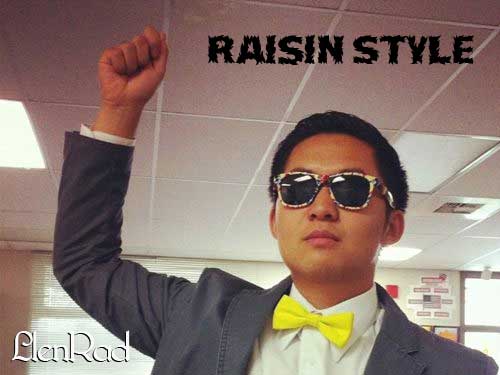 To nicksupasaur’s thousands of followers and all you racists fools who want to use black people as a punch line to get popular quick on social media, LISTEN UP.  While you laugh and make jokes we remain the mighty Africans in America who have been under attack by the strongest forces of EVIL on this planet for generations.  If you think your disrespectful antics will be tolerated without recourse you are sadly mistaken.  Let me put it to you like this, you better ask somebody what’s at the end of the road you’re traveling.  You may want to turn around or chose a better route.  I hope you don’t find out the hard way. 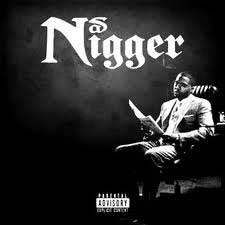 They say we N-I double G-E-R, we are
Much more, but still we choose to ignore
The obvious, we the slave and the master
What you lookin for? You the question and the answer

To you blissfully ignorant fools who still think racism doesn’t exist consider this.  In 2012 there are now race based standards being accepted in schools all across this country which allows black students to pass even if they read more POORLY than whites and ASIANS.  This is what institutionalized racism is all about.  I know some people still won’t get it.

Why do you think it was illegal for black people who were forced to work this land as slaves to read books about freedom?

Shout out to @DearDreamkiller on Twitter for adding more information on this story.  The racist Asian or Raisin that is it the subject of this post is also you guessed it a member of an organization called the KEY club.  Here’s a picture: 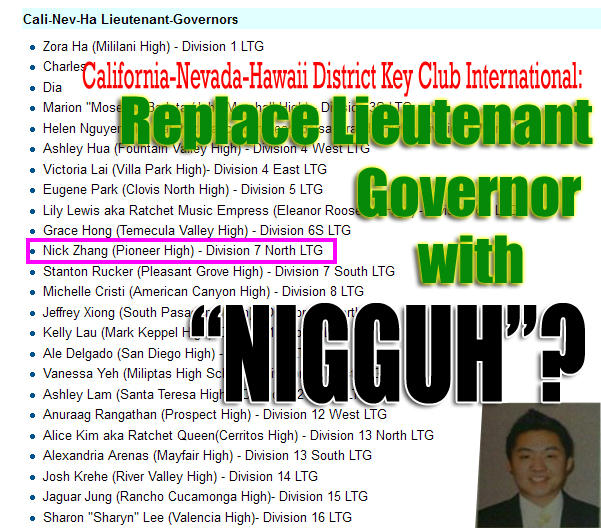