Home › Blog › Turn in Your Guns or not Guilty Michael Dunn?

Turn in Your Guns or not Guilty Michael Dunn?

I’m watching Jackass Al Sharpton on someNBC talking about the “stand your ground” law in this horrific case of senseless violence where a white man shot and killed ANOTHER unarmed black teenager in a dispute over loud music.

This happened on “black Friday” in 2012 on the day after Thanksgiving day in Jacksonville, Florida and it brings out a number of powerful points and emotions.

” I THINK THEY’RE GOING TO LET THAT MOFO OFF”

That’s what I said to this brother walking down Jefferson Street as I sat in bumper-to-bumper traffic in front of the Duval County Courthouse last Monday.

An hour earlier when I was inside the brand new $350 million dollar courthouse I had a discussion on a completely different topic with an Attorney and at the end of our chat he said, “Well, at least you’re not on trial for life like Michael Dunn.”

I told him, I would never shoot somebody because their music was too loud so it’s impossible for me to ever be in Michael Dunn’s situation.

As a profession they “advocate for the Devil” so much that they don’t realize they aid the cause of evil many times. 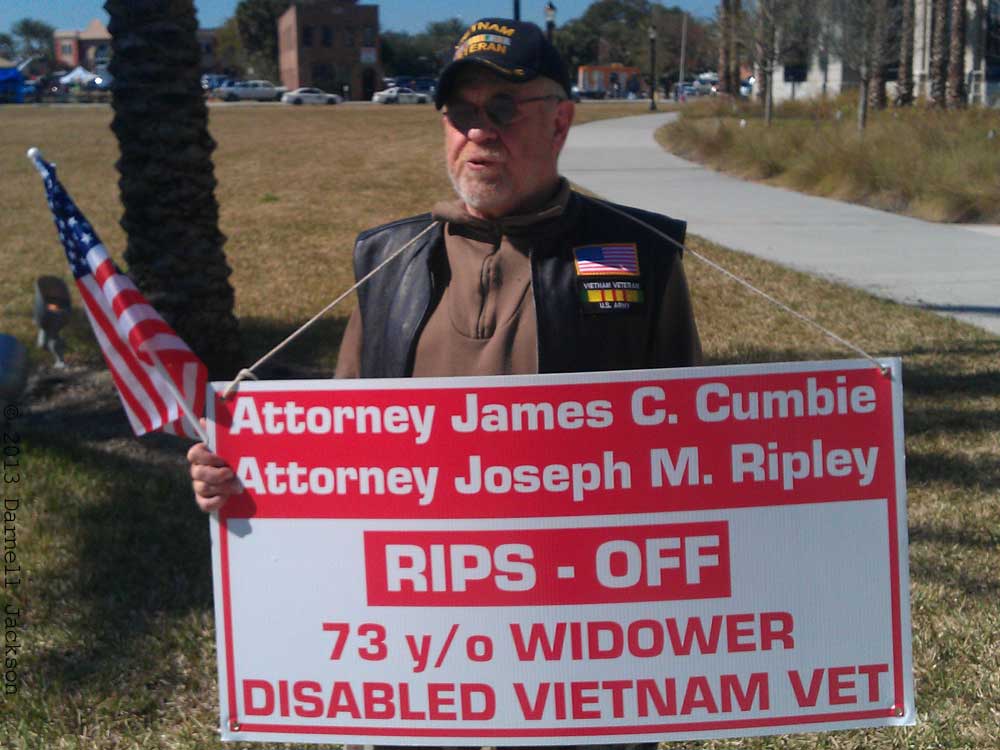 This man knows what I’m talking about when it comes to Attorneys. There is a reason why lawyers have a reputation as scum worldwide. They are basically licensed to rip people off. They file some papers in court and we as “the people” have no recourse except to be stupid enough to hire another attorney. I met this man this week on Monday protesting this BS in front of the courthouse.

I know I know.

These types of comments are supposed to be considered “controversial” in our “GODLESS society” while in reality even in the courthouse it says IN GOD WE TRUST and most movies, plays, and dramas always have some plot of a good guy vs a bad guy.

My point is there’s always a clear distinction between right and wrong, you know dudes on white horses and dirty mofos on black stallions.

Personally, I’m for the people, I agree with MLK and Gandhi, I believe we as individual people have the rights.

Therefore, I want to start a discussion on this important issue, I don’t want to fight even though I have to call some people out as jackasses, this is the language of the “pre-paid instigator pundit” so you have to speak their language to communicate with them.

The race bait league is full of Jackasses who all have been paid to promote an agenda and it’s nothing new, Mao Zedong said…

“Politics is war without bloodshed while war is politics with bloodshed.”

This is why I think they are going to let Michael Dunn off.

It’s easy to see the signs.  You have jackasses like Ed Schultz blaming a LAW on killing a man and not the EVIL inside a man.

Meanwhile It’s clear to anybody with common sense that Michael Dunn wanted to kill himself a young “nigger” err “gangsta or thug” remember this is LlenRad I have to keep it real.  He claimed self defense when he started shooting like a mad man into a car filled with young black teens here’s his truck load of BS testimony:


However, glory to God because Michael Dunn’s fiance would not corroborate his FOS story which could have sealed the deal for his defense.

She said HELL NO to that BS, you know he asked her too, talking about “hey, baby you know I love you they gone send me up the river for life just say he had a gun, pleeeeezzzzee”.

She doesn’t fear him she apparently fears God or she’s the type of person that knows the difference between right and wrong, good and evil you can even see it in her eyes, WATCH:

Now, if his fiance wouldn’t at least LIE for his ass you know he killed that young man in cold blood.

God bless Jordan Davis and his family, and the shooter too, and all of us.

What makes this tragedy worse is these race baiting pre-paid pundits using this event as a political extravaganza.

It’s like a circus with real tents and all, here’s a pic I took of the lot where all the media is set up: 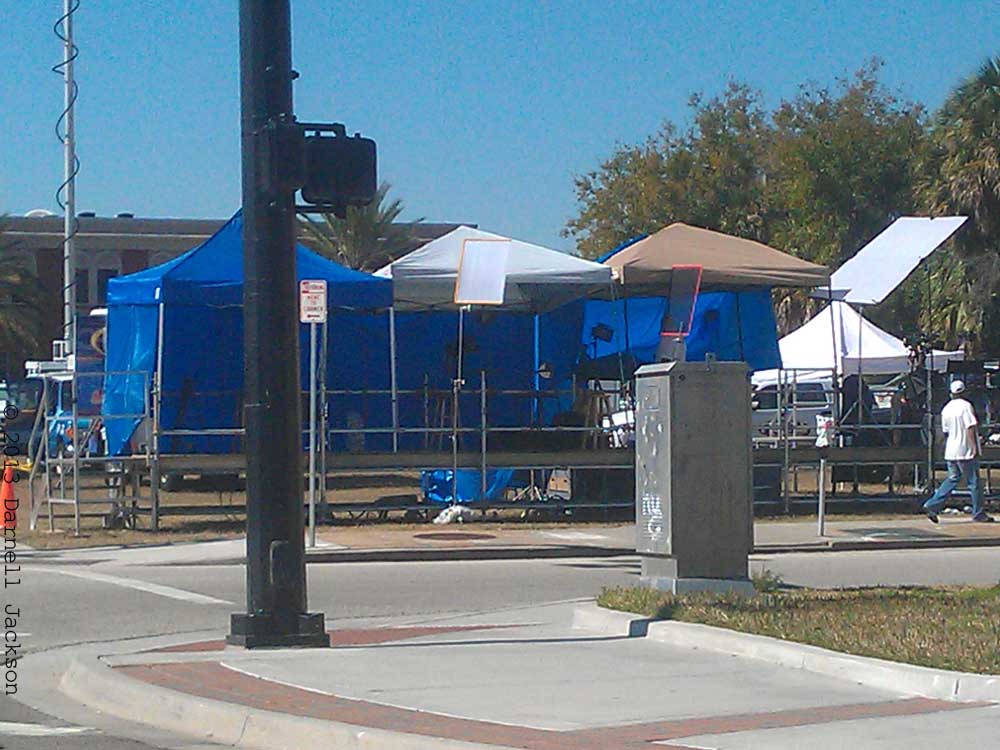 The media tent scene, pictured on the far right is the brother I told that they would let Michael Dunn off. Seems like the media is setting up for something big. I remember when I was in Miami for the Super Bowl watching ESPN set up for SportsCenter it just seems like something big is about to happen.

I started thinking that in reality this is a non-story UNLESS Michael Dunn is found NOT GUILTY isn’t it?

I’m thinking maybe all the media knows something that we don’t, maybe that’s the reason why there were so many administrative orders issued by the court months earlier outlawing certain practices like protesting from the courthouse grounds area and even defining the “media”: 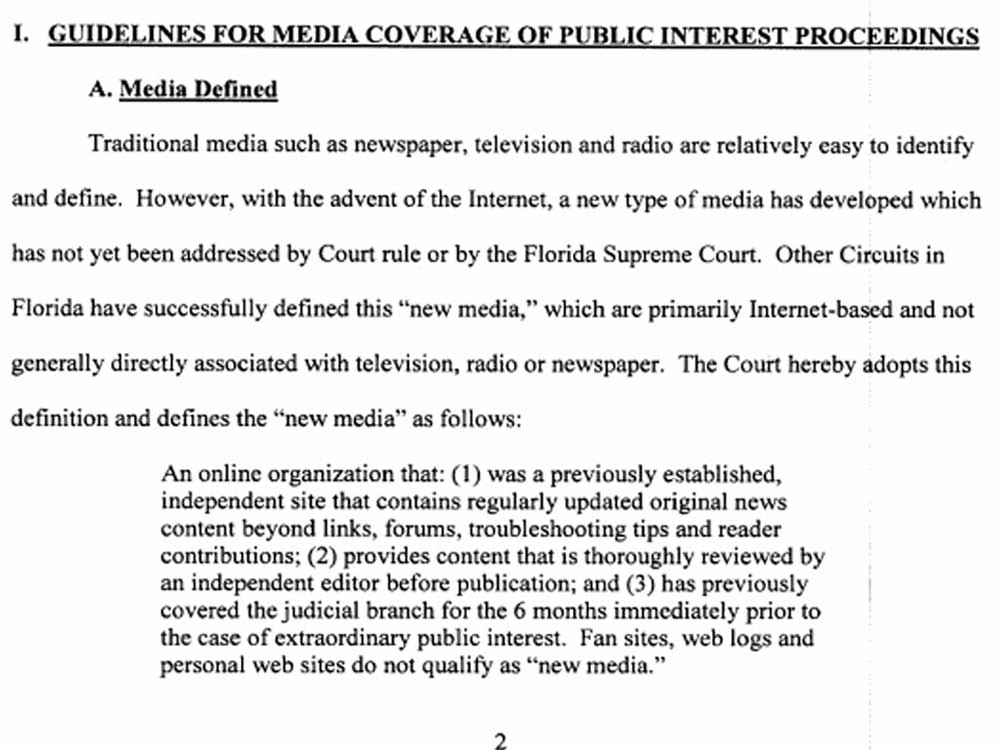 It didn’t stop me though I still got some footage.

He’s obviously pissed off and his harsh rhetoric I’m sure is echoed by many people in this county and country.

However, I think that anger only leads to mistakes.

He is obviously angry and whenever you take action when you’re angry you will end up making a big mistake that will leave you even more angry.

This is why I love what MLK taught us about such things,

This is the big problem that the so called “NEW” black panther party members are facing.  You cannot retaliate yourself into anything except war and this is the reason why people who advocate violence as a tactic must not be trusted.

The same goes for these gun grabbing pundits that want to blame a law for a murder.  This shows their true colors which is to strip you of your rights.

They would make a big deal out of black on black murders, what is this thing about black people killing each other what that’s “ok” but it’s a big deal when “whitey” is behind the trigger?

IT’S ALL ABOUT RIGHTS

This is what the gun grabbers like jackass Mayor Bloomberg just don’t understand.

We the people, have the right to defend our self.

We don’t loose our right because someone commits a murder and calls it self defense.

We are not inmates in a prison where if someone pisses in the hallway we’re all in trouble.

The good news is at least the Jacksonville Sheriff deputy did arrest Michael Dunn after this shooting unlike George Zimmerman so they did their job.

If their work is undone it will be the doing of a “higher authority”.

Here’s where the corruption comes in.

See, just a few weeks ago it was in the news about how ex governor Charlie Christ was caught reportedly “selling Judges”, a shocking charge but it’s one of many that has come out of his recent campaign for re-election.  I think he’s running for congress or some office whatever.

Anyway, it shows signs that corruption could be systematic and if a Governor could sell a judge then the powers at be could surely “fix” the outcome of a trial or two, couldn’t they?

This is why I’m almost sad in advance that they are somehow going to find a way to let Michael Dunn off for murdering young Jordan Davis.

Then, after he gets off or gets a reduced charge or whatever, they’ll tell us we have to pass anti-gun legislation and repeal “stand your ground” which will pit black people against white people.

White people will say, “Hey, I don’t want my rights reduced because of some idiot”.

Pre paid black pundits will say, “You’re a racist!” Then select corrupt church leaders will echo this sentiment confusing the masses and instigating the situation.

Meanwhile, they don’t want to answer the tough questions, Why are the so called “black civil rights leaders” and “community organizers” afraid to tell us to defend ourselves with the GUNS that we have a civil right to own?  Why aren’t they emphasizing that this “stand your ground” law protects us TOO?

Now it’s over to you, what do you think?

Data from Stand Your Ground cases

Zimmerman Protesters in California running out in the interstate

PEW RESEARCH:  Black unemployment is consistently double that of whites.