Home › Blog › What can Mitt Romney learn from Bill Cosby?

What can Mitt Romney learn from Bill Cosby?

Welcome to the 2012 political circus…Scene 1 act 1:  The Republican National Convention.

It’s really embarrassing watching adults behave this way.  If you have seen any of the coverage from the big networks it’s the same scene over and over.  Grown men and women just oozing and fawning over themselves for just telling you how awesome they think Mitt Romney is.  Talk about fans.

They sound like a bunch of awkward teenagers trying to impress the cool kids with their endless meaningless compliments.

Even though many of these same people were just trying to convince us of how bad Mitt was just a few months ago during the Republican primaries.  People like Herman Cain have changed their tune dramatically haven’t they?  I guess they expect you to do the same.

The untrustworthy pundits are in Olympic form promoting all of the great values and qualifications of Mitt Romney and Paul Ryan.  The truth as they say stands alone and like it or hate it you have to accept it right?  Ok then, what is the truth about Mitt Romney?

There are at least two facts about Mitt Romney that cannot be disputed:

1.  He lives within his means.  Even though his means are massive and probably tainted he is collecting tens of millions of dollars each year while paying very little in taxes.  What ever it is he is earning his family lives within that.  If he didn’t have NET PROFITS there would be no money to tax right?  Compare that to most people who’s monthly expenses far exceed their income so they live off the credit card and minimum payments.  Think about how many celebrities were multi-millionaires and ended up flat broke because of over spending?

2.  He thumbed his nose at WAR and taught his family the same.  My grandfather once said “The Army ain’t no place for a Black man.”  This is part of the reason I never joined the military (My Grandfather fought for the Army in Korea by the way).  I guess Romney was consistent because he didn’t fight in Vietnam and none of his sons joined the military either.  Seem like a  family tradition. 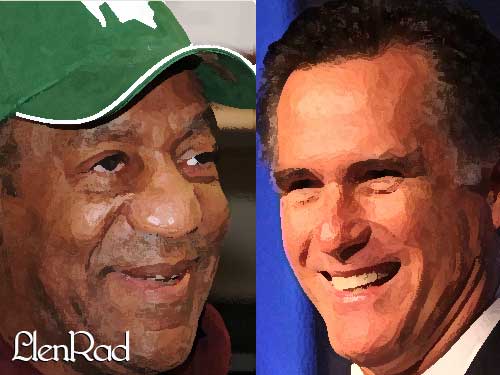 However it was Bill Cosby trending in the news that made me think about this point.  Bill Cosby like Mitt also raised 5 children.  He was known for teaching his family certain virtuous principles and values too.

The difference is he also taught the same goodness to the public and anyone he knew.  He didn’t just keep the good stuff for himself and sell everyone else trash just to get more money.

Back in the day Bill Cosby did have a conversation with Eddie Murphy about setting a good example that was hilariously characterized by Eddie in RAW.  Did you know that ever since RAW Eddie Murphy has never done a stand up tour?  How eerie is it that the skit was about Cosby’s son Enis who was tragically killed in 1997.

Bill Cosby doesn’t curse or use foul language to get his jokes or point across.  He lived what he taught.  He even got ridiculed when he started talking about personal responsibility in the public regarding the black community.  What he does is what he feels is right.

Contrast that with Mitt Romney.  Does he care about the people in the companies he took over like he does his own family? Does he really?

Why does he recommend America should borrow more money to solve its debt problem while his family is probably debt free?

Why does Romney recommend American men and women sign up to fight MORE WARS although his family would NEVER fight a single one?

Would America be better off if it had the Romney family values of NO WARS and NO DEBT?

What can Romney learn from Bill Cosby?